Twenty Thirteen: a prize for the most awkward-sounding year.

It's a new year (it's a new day, it's a new dawn, it's a new liiiiiife) and while I'm not really one for doing things purely because it's a certain date or a social norm, I am in the process of trying to change some aspects of my life in general, so I guess that I do have some "resolutions."

- watch at least one movie per week
- read at least one book per week
- write/document every book or movie, even if it's just one paragraph
- re-read Les Misérables cover-to-cover, at least one chapter per day
- watch the entirety of Lost without looking up any spoilers

- start learning to drive
- complete scrapbooking/photo albums of 2009 - 2012 events and travel
- visit a country that I've never been to before, that isn't a Western culture, and survive my eating problems
- visit my family in Israel

So yes. I need to get a new diary and calender in order to cross things off, like the vitamins, or make some sort of checklist. Christmas was ehhhh. The hype does not thrill me, and large social gatherings of family whom I either have to "explain myself" to or avoid make me quite anxious. I hope you all had a nice time. I was delighted to receive a StarKid fan-made shirt in this style from my Hypable Secret Santa. I was also sent an epic Not Another Teen Wolf Podcast stenciled tote bag and a hand made Teen Wolf charm pin by my crafty friend Courtney (who is definitely the greatest addition to my heart that 2012 gave me.) My housemate Francesca gave me a Wills and Kate Christmas card, which is definitely a keeper, and the four of us in our house had a small Christmas party in which we went to the zoo, then came home and watched Elf and Love Actually. 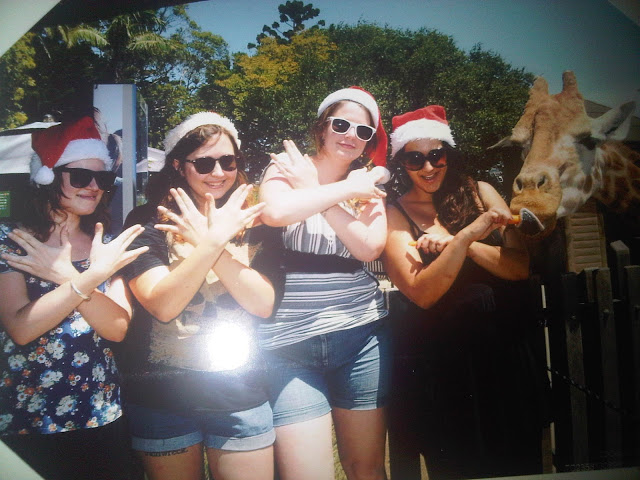 On New Year's Eve, we went out at midnight and watched the fireworks over the city from the hill at our train station. It wasn't the full show, it was about nine awkward locals standing around in silence on a traffic island together, but whatevs. We actually spent most of the evening at home having drinks and watching Big Fat Quiz of the Year 2012, which was amazing. Lobstromonous, even. The best BFQOTY since maybe 2007, or even 2006, (the first one I saw, back when I was living in London) - fuck, have I fucking mentioned how much I fucking love British comedy and all these people? Because I do. A lot. 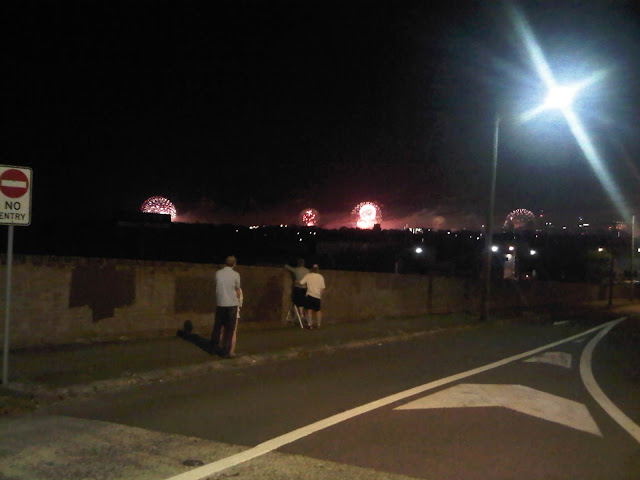 - had a panic attack over the fact that Tyler Hoechlin is just currently chilling somewhere in my city, like no big deal
- tediously spent around 16 hours editing a podcast
- watched Pitch Perfect (at the cinema) and People Like Us (at home) - reviews coming tomorrow
- finished the first book in Tamora Pierce's Immortals quartet, which I am re-reading for the 762nd time because my friend Mark is reading and writing about them on his blog

- not been able to stop thinking about Les Mis in some format for approximately 20 of the 24 hours in any given day, I mean seriously we're talking about anything from comparing the various cast recordings and loving how the film has thrown back to the original 1985 London cast in regards to tone and delivery; to remembering more canon included that I forgot to mention here, like Marius threatening to blow up the barricade; to dipping in and out of the book (mainly Les Amis, I won't front) and recalling what an actual lolrus Victor Hugo was, how funny, snarky and distinct he made these ten boys ("Here lies Blondeau, Blondeau the Nose, Blondeau Nasica, the ox of discipline, bos disciplinae, the bloodhound of the password, the angel of the roll-call, who was upright, square exact, rigid, honest, and hideous. God crossed him off as he crossed me off.") and how much more horridly tragic it is when they all die so specifically; to mapping out a walk described in the book by comparing a map of 1830s Paris to current Google Maps and finding out what streets changed names; to wondering why no one has made some sort of graphic set incorporating the Frank Ocean verse of "No Church In The Wild" with stills from the film; to trawling Youtube for bootlegs and trying to work out how much book/stage-show/movie crossover there is (and deciding that the director and cast of this period of the West End run really have the right thing in mind when it comes to Enjolras and Grantaire, damn; to theorizing how, because of above hilarity, snark and distinct characterisation, that if the BBC or HBO did a miniseries just about Les Amis, about their formation as well as Eponine and Marius's friendship, and the few years lead up to the June Rebellion - if viewers got to know these bromantical boys, with their nobility and their sass, that it would be complete and utter fandom fodder and then they'd have to open a support phone-line to deal with the results of the finale in which all the people you love are KILLED HORRIBLY AND SPECIFICALLY, not in one big shoot-out as per the musical. So yeah. That's mainly been my 2013.

Today, however, was a little different. Everyone in my house had a day off, so I took them to two different Eastern Suburbs swimming locations. I'm not a fan of the Eastern Suburbs, it's a very snobby and rich area, the kind of young people who choose to live there are not generally the kind of people who would mesh well with the kind of people who live in the Inner West, like me, and it's very difficult to get around as far as transportation goes. I mean, I even grew up on the North Shore, which is VERY upper middle class, and I went to a Catholic private school. Eastern Suburbs private schools make my school look like Waterloo Road. But the area has great swimming.

These aren't coastal beaches, like Bondi or whatever you might be familiar with. These are within Sydney Harbour, so much more sheltered. The first is a private beach at the bottom of the gardens belonging to a public historic house: 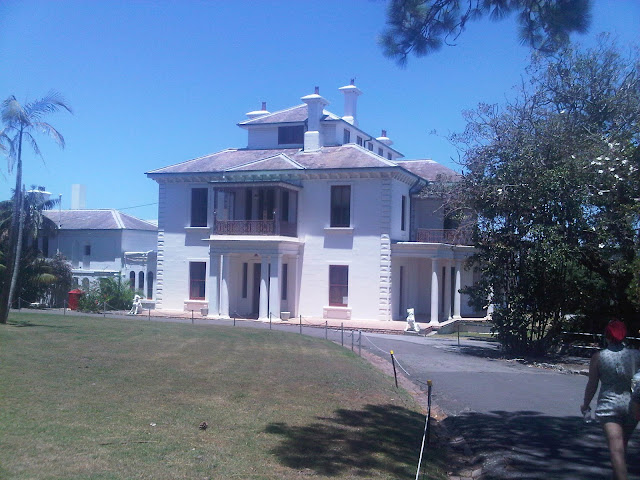 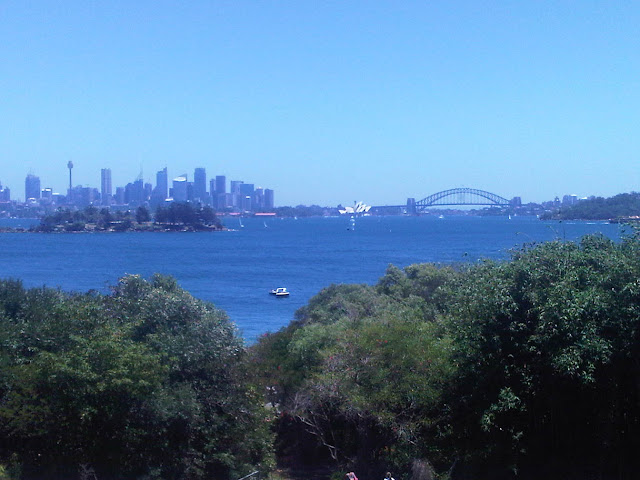 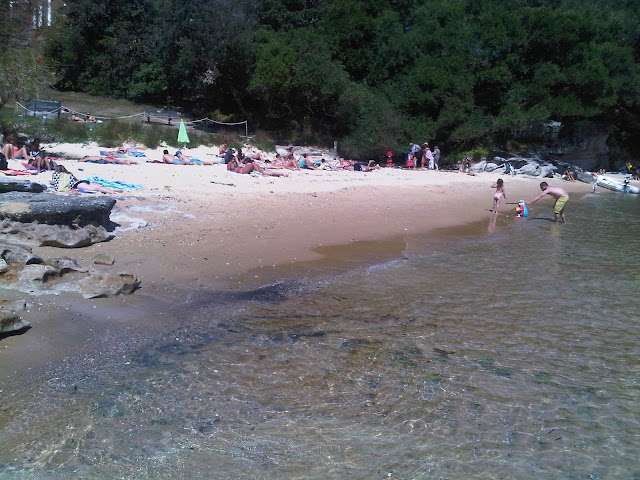 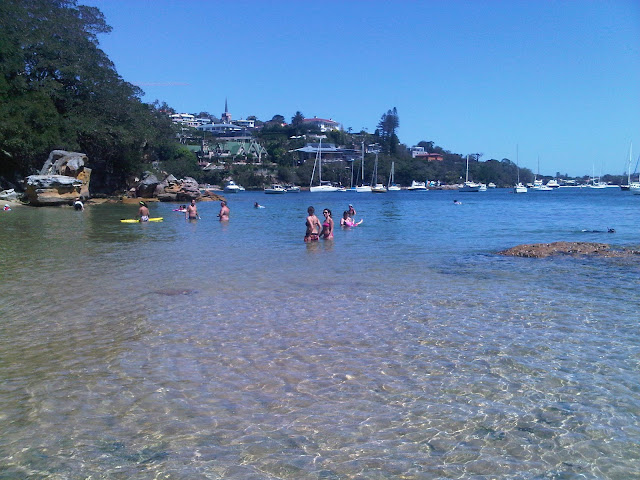 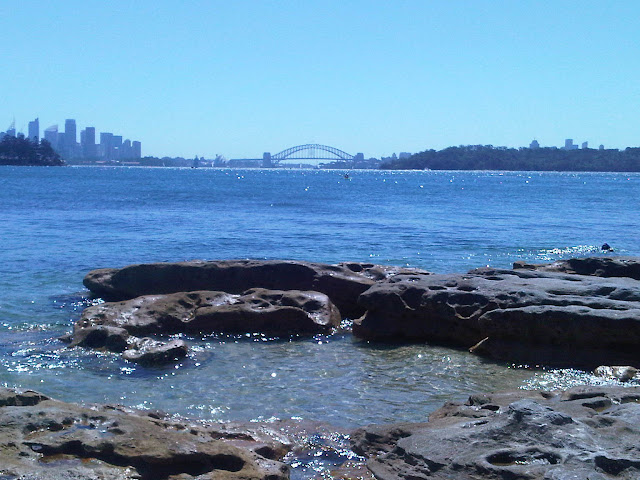 After a couple of hours here, we moved down the road a little bit to Murray Rose Pool in Double Bay, which was called Redleaf Pool when I was a kid. This is a huge harbor pool with facilities: showers, a cafe, and most importantly, things to jump off of. 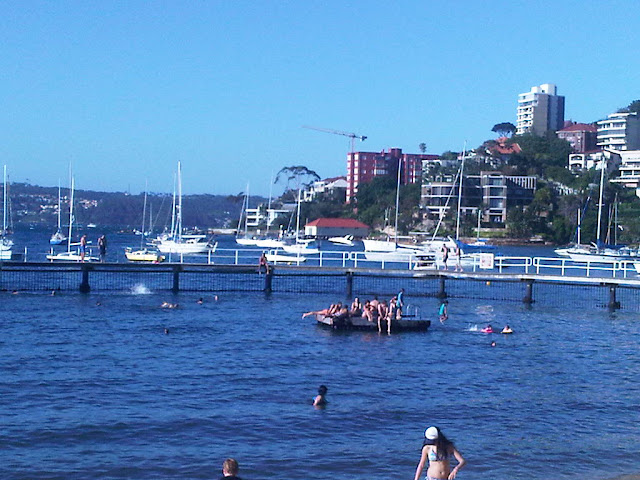 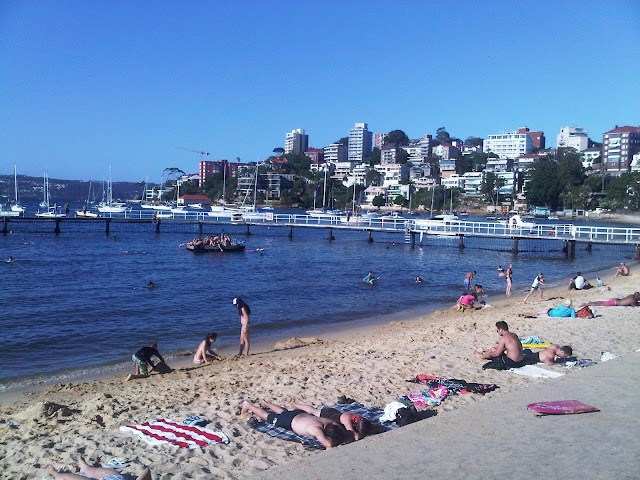 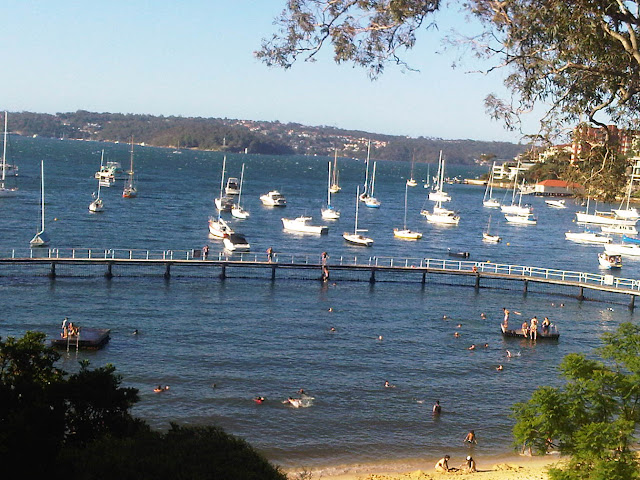 There was much leaping to be done, off the pier fence boardwalk, and off the floating pontoons.

Also, at this pool. a tiny little girl, around three years old, made her mother tell me she liked my swimsuit. I looked down and the kid had literally exactly the same swimsuit as me - a one piece in the same exact print - and I did not know whether to feel complimented or humiliated. Oh well. 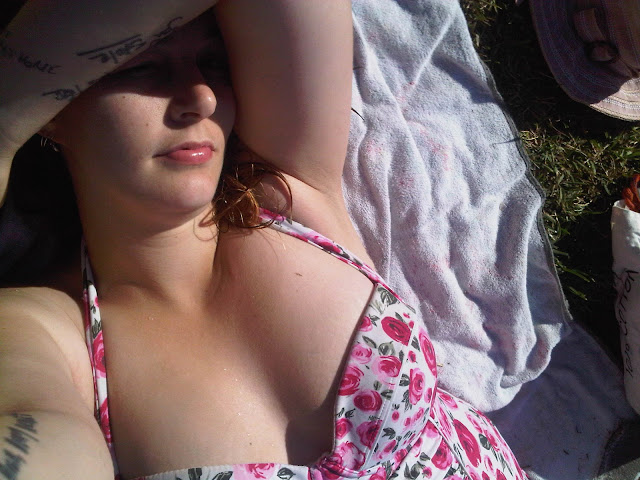